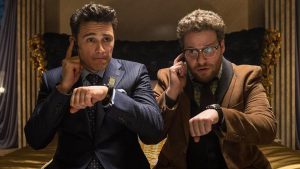 ‘The Interview’ (2014), what a terrible mess of a film. Usually Franco and Rogen are a satisfying comedic pair together and the premise was interesting but the overabundance of flat jokes, ridiculous over the top performance by Franco and a script that was likely written by a 12 yr old is what destroys this film. Avoid it like the Plague.