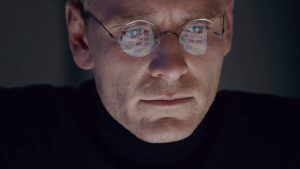 ‘Steve Jobs’ (2015), a film directed by Danny Boyle, takes a much more unorthodox approach in exploring the character of Jobs. The story is centered strictly around three product launches where Jobs has to battle out between the ‘Family Man’ and the ‘Inventive genius’. Suffice to say, it keeps your attention throughout its 2 hour mark. Fassbender gives a good performance but its still quite difficult to envision him as such a well known public figure as Steve Jobs and the bombardment of melodrama in every sequence seems unrealistic and soap-operatic. But a well written script and dedicated cast does make up for its flaws.