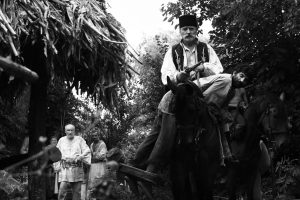 ‘Aferim!‘ (2015) is an Ottoman Turkish word for “Bravo!“. A word I could possibly use to praise the film. This Romanian film takes place in early 19th Century where a Father and son are hired to track down a Gypsy slave that might have stolen money from his Master. And of course, more story is left to be unfolded.
Radu Jude’s vision parallels heavily on the on-going refugee crisis and continuing racism towards the Romani people. The lack of color and close ups within each scene leaves the viewer in a slightly uncomfortable position, suggesting that we also silently allow the injustice to continue with the phrase “That’s how things are…“. The film is ugly and sometimes unbearable to watch but nonetheless, its beautiful filmmaking.