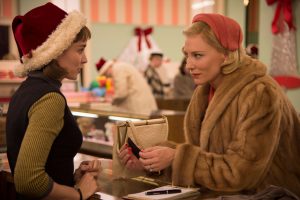 ‘Carol’ (2015) is a melodrama set in the 1950s (adapted from the novel ‘The Price of Salt’) where Therese (Rooney Mara) is an aspiring photographer who falls in love with an older, more sophisticated woman named Carol (Cate Blanchett). Within the mist of a difficult divorce process with her husband, Carol and Therese embark on a journey across the West, trying to find answers in a world gone array.

On paper, this might seem like a film one had seen countless times before but it is Todd Haynes’s impeccable attention to detail and dialogue that makes the 1950s America so authentic and believable. Similar to the works of Douglas Sirk and Rainer Werner Fassbinder, Haynes loves to explore melodrama and doomed romances onscreen. Other than its obvious lesbian subject matter, ‘Carol’ is an extremely well written love story that could well be substituted with any sex, race or religion. Even though the third act might seem predictable to some, the film’s writing is sublime to the core and the chemistry between Cate Blanchett and Rooney Mara is what makes the film such a heartening romance to observe.